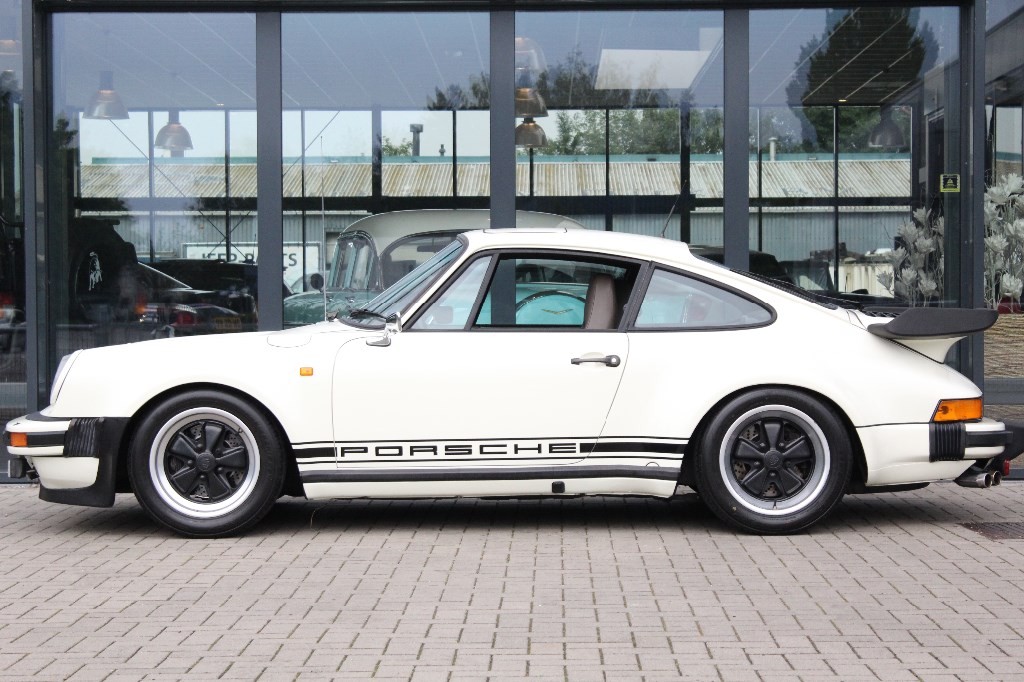 The Porsche 930 was a sports car built by Porsche between 1975 and 1989, known to the public as the 911 Turbo. It was the maker’s top-of-the-range 911 model for its entire production duration and at the time of its introduction the fastest production car available in Germany.

Porsche began experimenting with turbocharging technology on their race cars during the late 1960s, and in 1972 began development on a turbocharged version of the 911. Porsche originally needed to produce the car in order to comply with homologation regulations and had intended on marketing it as a street legal race vehicle like the 1973 Carrera 2.7 RS. The FIA’s Appendix “J” rules that brought about the 911 Turbo Carrera RSR 2.1 in 1974 changed in 1975 and 1976. The FIA announced that cars for Group 4 and Group 5 had to be production cars and be available for sale to individual purchasers through manufacturer dealer networks. For the 1976 season, new FIA regulations required manufactures to produce 400 cars in twenty-four months to gain approval for Group 4. Group 5 would require the car to be derived from a homologated model in Group 3 or 4. Porsche’s group 4 entry was the 934, homologated on 6 December 1975. For Group 5, Porsche would create one of the most successful racing cars of all time, the 935. While the original purpose of the Porsche Turbo road car was to gain homologation for the 1976 racing season, it quickly became a cult road car. 400 cars were produced by the end of 1975. Since Porsche wanted to be racing for the 1976 season, they gained FIA homologation for the Porsche Turbo for Group 4 in Nr. 645 on 6 Dec ‘75 and the 1,000th 1976 Turbo was completed on 5 May ‘76.

Ernst Fuhrmann adapted the turbo-technology originally developed for the 917/30 CAN-AM car to the 3.0 litre flat-six from the Carrera RS 3.0, creating what Porsche internally dubbed as 930.

Total output from the engine was 260 PS (191 kW; 256 hp), much more than the standard Carrera. In order to ensure that the platform could make the most of the higher power output, a revised suspension, larger brakes and stronger gearbox became part of the package, although some consumers were unhappy with Porsche’s use of a 4-speed whilst a 5-speed manual was available in the “lesser” Carrera. A “whale tail” rear spoiler was installed to help vent more air to the engine and help create more downforce at the rear of the vehicle, and wider rear wheels with upgraded tires combined with flared wheelarches were added to increase the 911’s width and grip, making it more stable.

Early US-spec 930 – note
“Turbo Carrera” badging
Porsche badged the vehicle simply as “Turbo” (although early U.S. units were badged as “Turbo Carrera”) and debuted it at the Paris Auto Show in October 1974 before putting it on sale in the spring of 1975; export to the United States began in 1976.

The 930 proved very fast but also very demanding to drive fast, prone by its short wheelbase, rear engine layout to oversteer and turbo-lag.

Porsche made its first and most significant changes to the 930 for 1978, enlarging the engine to 3.3 litres and adding an air-to-air intercooler. By cooling the pressurized air charge, the intercooler helped increase power output to 300 hp (DIN); the rear ‘whale tail’ spoiler was re-profiled and raised slightly to make room for the intercooler. Porsche also upgraded the brakes to units similar to those used on the 917 racecar. While the increase in displacement and addition of an intercooler increased power output and torque, these changes also increased the weight of the vehicle, especially to the engine, which contributed to a substantial change in the handling and character of the car when compared to the earlier 3.0 litre models.

Changing emissions regulations in Japan and the U.S. forced Porsche to withdraw the 930 from those markets in 1980. It remained, however, available in Canada. Believing the luxurious 928 gran turismo would eventually replace the 911 as the top of the Porsche line, Fuhrmann cut back spending on the model, and it was not until Fuhrmann’s resignation that the company finally committed the financing to re-regulate the car.

The 930 remained available in Europe, and for 1983 a 330 PS (243 kW; 325 hp) performance option became available on a build-to-order basis from Porsche. With the add-on came a 4-pipe exhaust system and an additional oil-cooler requiring a remodelled front spoiler and units bearing the add-on often featured additional ventilation holes in the rear fenders and modified rockers.

A 1982 Porsche 911 SC modified to the Flachbau (“flatnose” or “slantnose”) appearance.
Porsche offered a “Flachbau” (“flatnose” or “slantnose”) 930 under the “Sonderwunschprogramm” (special order program) beginning in 1981, an otherwise normal 930 with a 935-style slantnose instead of the normal 911 front end. Each Flachbau unit was handcrafted by remodeling the front fenders. So few were built that the slantnose units often commanded a high premium price, and an initial premium of up to 60 per cent (highly individualized cars even more) over the standard price. 948 units were built. The Flachbau units delivered in Europe usually featured the 330 hp (246 kW) performance kit.

By the 1985 model year, 928 sales had risen slightly, but question remained whether it would supersede the 911 as the company’s premier model. Porsche re-introduced the 930 to the Japanese and U.S. markets in 1986 with an emission-controlled engine producing 282 PS (207 kW; 278 hp). At the same time Porsche introduced Targa and Cabriolet variants, both of which proved popular.

Porsche discontinued the 930 after model year 1989 when its underlying “G-Series” platform was being replaced by the 964. ’89 models were the first and last versions of the 930 to feature the G50 transmission, a 5-speed manual transmission. A turbo version of the 964 officially succeeded the 930 in 1991 with a modified version of the same 3.3 litre flat-6 engine and a 5-speed transmission.